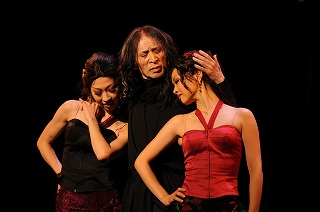 Our latest work, La Celestina, has received an invitation to the 15th Festival de Jerez 2011, Spain. We are very honored that we could performe for the first time in Spain and particulary in Jerez, one of the cradle of flamenco.

Due to some unavoidable circumstances there will be some changes in the original cast and musicians of the premiere in 2009. Esmeralda Manzanas Sánchez will fill in for Tamara López, Hugo López for Francisco Morgado, Jesús Méndez for Pedro Obregón and Mónica Navarro for Caridad Vega.

[Mar. 6, breaking story]  Here is a list of some websites where you can enjoy wonderful pictures of our performance:

[Mar. 5, breaking story]  The Internet television Flamenco TV has published a videocip (3' 38'') of the first scene of La Celestina where you can see Calisto fall in love with Melibea at first sight.

[Mar. 3rd, breaking story]  canalflamencotv has just released the complete version of La Celestina on its video gallery. See the top page and you will see Videoteca on the right. Choose "COMPAÑÍA SHOJI KOJIMA" to watch the video.

[Mar. 2nd, breaking story]  The Festival of Jerez Televisión has just published a video on vimeo. It's a 4-minute, 41 second clip.

canalflamencotv, the Spanish all-flamenco compucasting channel will broadcast a special program on La Celestina at 2:00 p.m., Spanish time (GMT+1). There will be another program tomorrow, 3th at 1:00 a.m. Spanish time.

FlamencoworldTV has released a short video on YouTube as you can see below.

[Mar. 1st, breaking story]  We have just received acclaim from the critics of Spanish newspapers and magazines in there latest editions.

[Feb. 27th, breaking story]  The EFE Agency has released a video on Youtube, as below, where you can see Kojima dancing with all the musicians in a rehearsal studio.

[Feb. 26th, breaking story]  At 13:00 we held a press conference at the Bodega de San Ginés, a winery near the Teatro Villamarta. You can see the video on Festival de Jerez Televisión. Javier Latorre, Kojima and Chicuelo attended the conference with Jesús Fernández, a young dancer who would perform at midnight in "Ciclo Los Novśimos".